Real NZ NZCH for FSX only

This is a budget-priced version of Real NZ NZCH for FSX/FSX Steam Edition only. There is no upgrade path from this product. Note that there is a separate product which includes a license for Prepar3d 3/4/5 and FSX, including FSX Steam Edition, so if you expect to use Prepar3d at any time then you should consider the full-priced product!

Christchurch International Airport (NZCH) is the main South Island airport, the second-biggest in New Zealand after Auckland. This scenery includes a large area of photoscenery depicting the city of Christchurch, and a large section of Canterbury between the Ashley and Rakaia rivers, including Banks Peninsula.

Disclaimer: Any screenshots shown may contain other addons which improve the appearance or operation of NZCH, but are not required or included. These may need to be purchased from their respective developers -- these include GSX, which adds the Visual Display parking systems, Orbx AI traffic, and Orbx HD trees, which improve the look of some of the autogen trees in Christchurch. 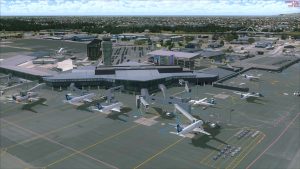 I never thought I'd complete a NZCH project. I was born and raised in Christchurch, so I'm particularly proud of my city. It has had a rough time lately with earthquakes, and more recently the mosque shootings, but it will be back better than ever. The scenery depicts the 'current' state of the city, which is in the middle of a major rebuild. The photoscenery depicts some of the changes wrought by the earthquakes, such as the 'red zone' close to the Avon River, where entire suburbs were destroyed. You can see the neatly laid-out streets, but all the homes are gone. The central business district is a dusty building site, mainly.

The rebuild process was estimated to take 15 years, and we are half-way there. I may revisit the city project when it is finished, but I'll be aged about 70 by then, so I'm not promising anything.

A great feature of the area is Banks Peninsula, the remains of two extinct volcanoes, which have eroded into a fascinating landscape of rocky outcrops, bays and convoluted coastlines. It is home to Lyttelton, the Port of Christchurch, linked to the city via a road tunnel under the Port Hills. 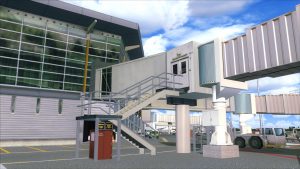 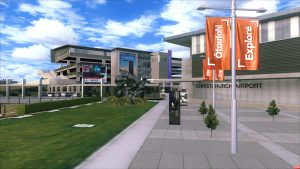 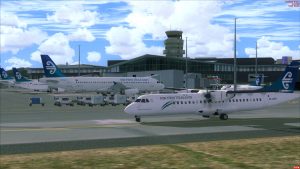